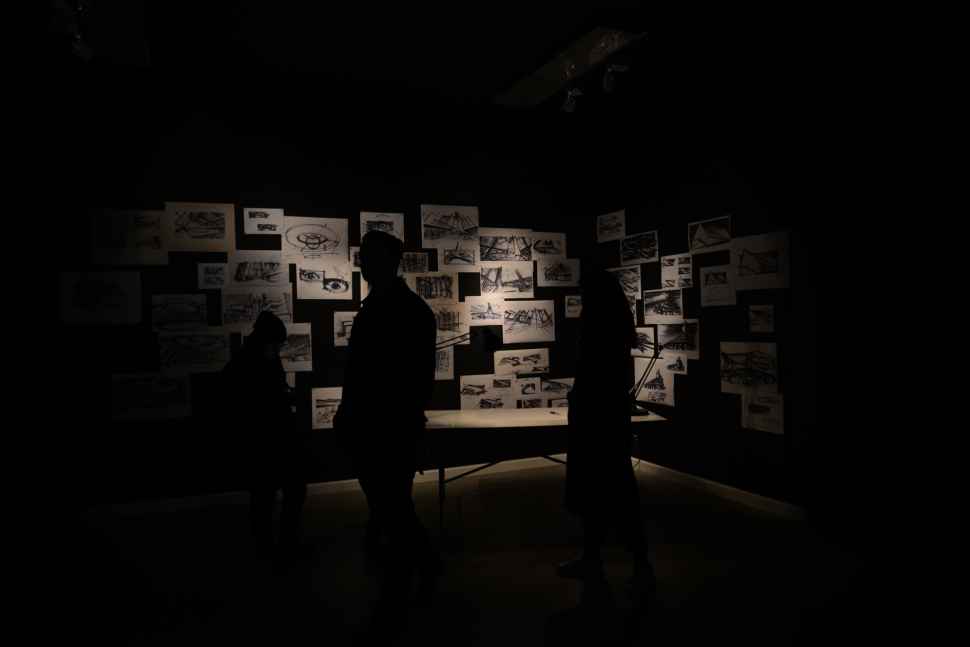 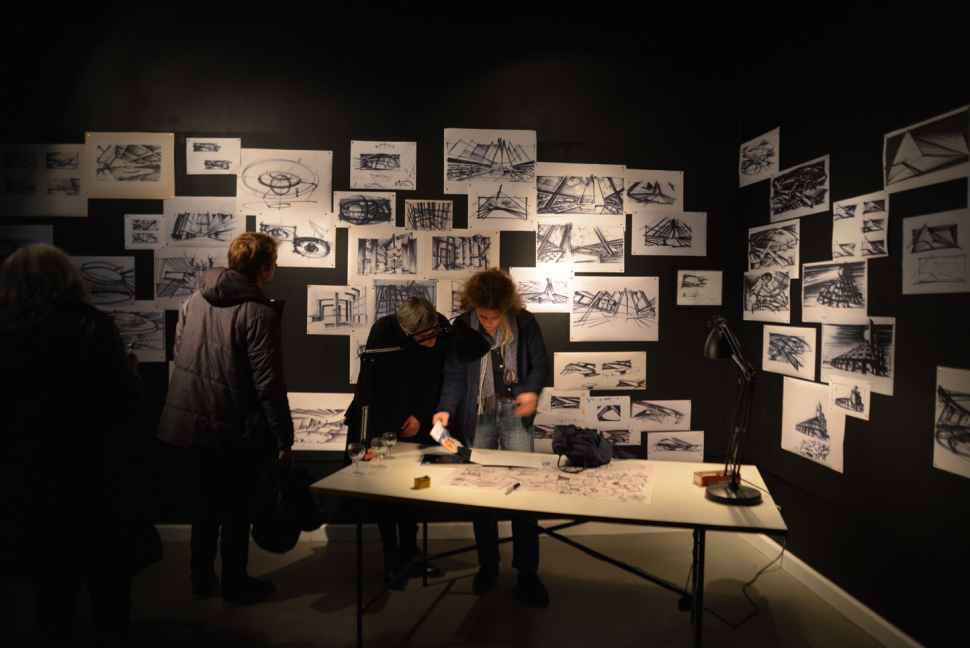 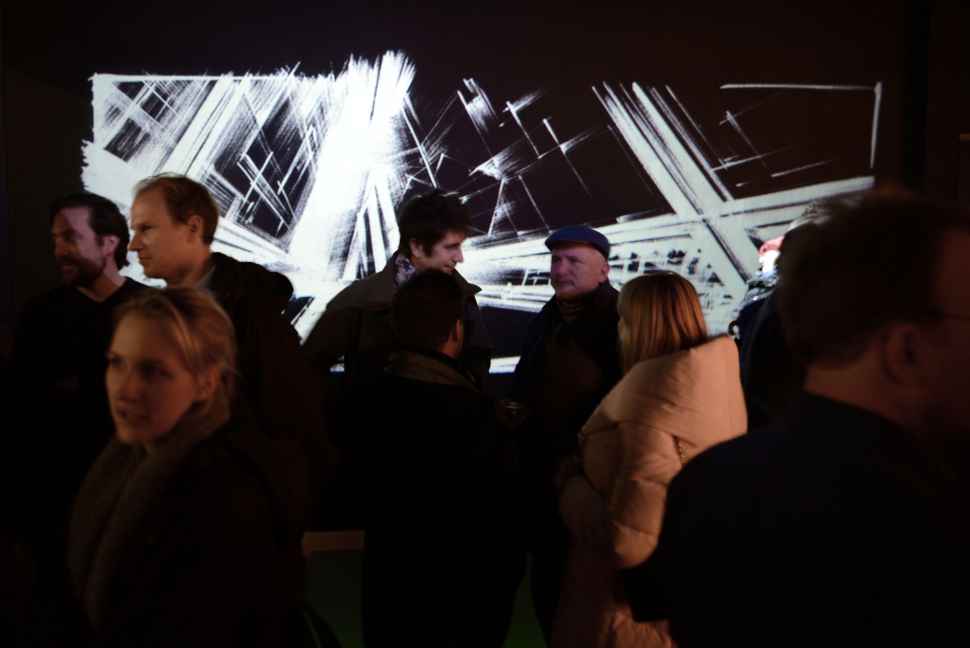 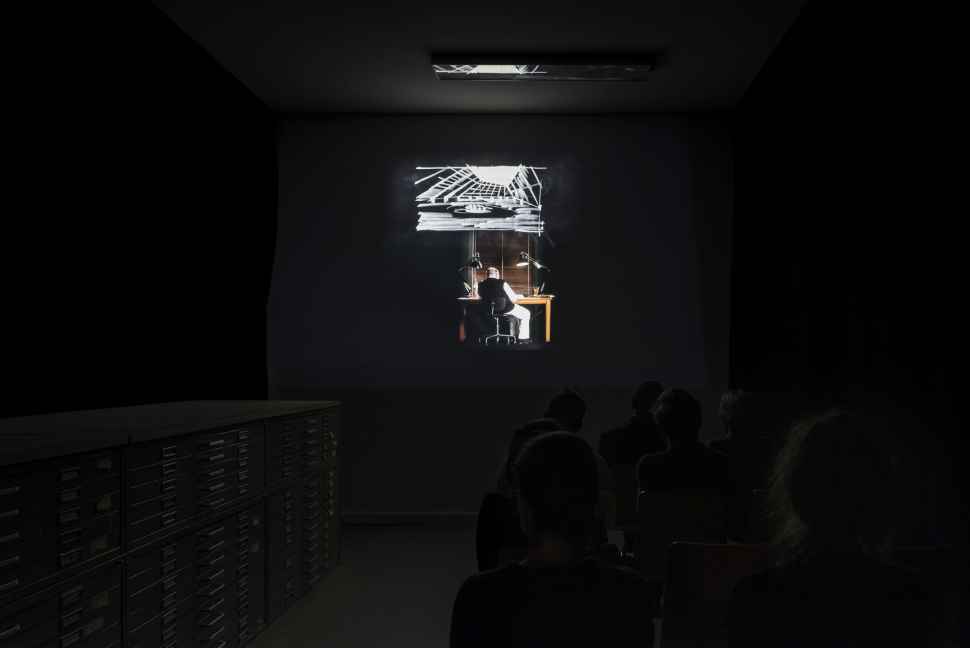 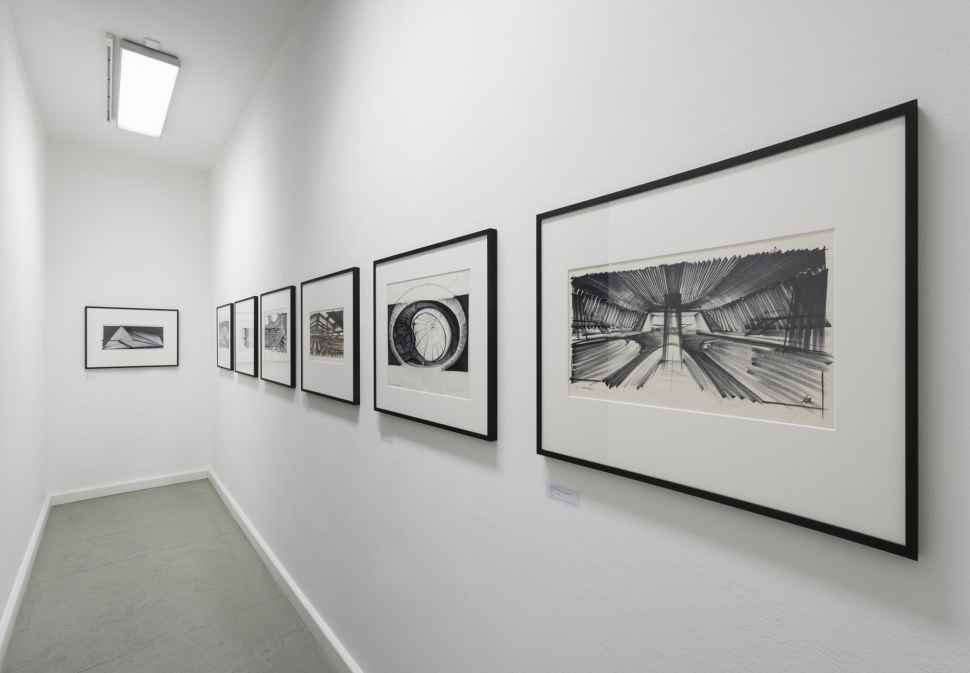 
Berlin in the 1920s: a loud, garish, unfathomable and modern city. Born there in 1921 into an upper-middle-class Jewish family, Ken Adam grew up as Klaus Hugo Adam between the architectural utopias of Erich Mendelsohn and Mies van der Rohe, between art and cinema.
Even when classic modernism’s heyday was long past, the spatial visions of this era remained very much alive in Adam’s designs and legendary film sets. Scarcely any other production designer has left us so much stylised reality—exaggerated, ambivalent, and often critical. Many of Ken Adam’s spectacular film set designs, such as the central room of the villain Blofeld in You Only Live Twice (director: Lewis Gilbert, 1967), which is concealed inside a huge extinct volcano, or, in the film Moonraker (director: Lewis Gilbert, 1979), the pyramidal control centre and the rocket launching pad that are hidden inside a Mayan temple have indelibly impressed themselves onto our visual memory.
Employing a focussed dramaturgy, in the O&O Depot we present Ken Adam’s visions—in an immersive form that intervenes in space and using selected original drawings. The sketches and series of drawings, which were chosen from an oeuvre consisting of more than 5,500 drawings, direct the viewers’ attention to the design process. For Adam, sketching was an area of development that offered a basis on which further ideas could arise, comparable to a kaleidoscope in which minimal movements can create new images. From this area of experiment emerged the form, the subsequent design of the set.
The tool used by Adam for his unmistakable graphic style was a kind of felt pen known as a Flo-Master. With this pen, a fluid shorthand medium with which his visual ideas could be quickly transferred onto paper, he was not only able to draw very quickly but also achieved a strongly expressive style that included atmospherically intense effects of light and dark. The graphical intensity that we often find in his drawings, which is produced by his broad, powerful strokes, suggests something of the agility with which Adam’s hand obeyed his inner eye and led ideas about the shapes of spaces and buildings “outwards”. Here the drawing became a living being, which Adam constantly drove further until he found the right form, the suitable set for the particular film and its content.
The documentary film THIS IS THE WAR ROOM! by Boris Hars-Tschachotin also forms part of the exhibition and offers deep insights into Ken Adam’s creative intellectual approach. For this film Ken Adam, at the age of 93, took up his Flo-Master once more. In front of the viewers’ eyes he once again designs the nuclear-proof conference room underneath the Pentagon, the iconic War Room from Dr. Strangelove or: How I Learned to Stop Worrying and Love the Bomb (director: Stanley Kubrick, 1964). In the process, he tells about the fundamental spatial metamorphosis of this centre of power. Premiered at the Venice International Film Festival in early 2017, this documentary received support from O&O Baukunst.
Our thanks go to the Deutsche Kinemathek – Ken Adam Archive for their loans.
Our special thanks to Danjaq, LLC and Metro-Goldwyn-Mayer Studios Inc. and the courtesy of Michael G. Wilson and Barbara Broccoli, EON Productions Ltd. for the loan of concept drawings, some of which have never previously been on display.
Curators:
Markus Penell, O&O Baukunst
Boris Hars-Tschachotin, Film director, Liquid Blues Production
Pictures: © Deutsche Kinemathek - Ken Adam Archive